One of my new paintings for my upcoming solo show at the Union for Contemporary Arts.  This oil painting is called “The Martyr, The Monarch, and The Mercenary”. The painting is about the massacre of the innocents, the thousands who are killed in their countries by genocide, wars, and street violence. Everyday on the streets of the United States, Africa, South America, the Middle East and especially in Syria, innocent children are being killed. Innocent victims in the crossfire. The youth are the CHRYSALIS of tomorrow. They are the transition from apathy to empathy and they are the hope and BUTTERFLY of the future.

I will have more info about my upcoming show at ABEND Gallery in Denver later this week.

Thank you for your support! 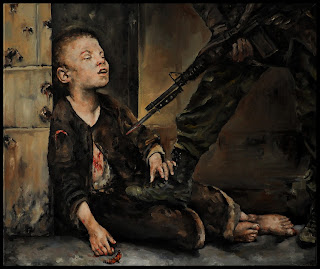