Dicken's Writing and My Sketches

Dickens’ writing portrays much of the events of his troubled childhood in England. He witnessed the pain he felt and saw firsthand on the streets of London. When he was twelve, Dickens’ father was imprisoned for debts he owed. Dickens during this time period was sent to work in a boot-blacking factory rather than attending school.

These bleak memories and hardships that he witnessed first-hand would influence the tone and mood of his writing for years to come, including in ‘A Christmas Carol’. He wanted to portray in this all the wrong that he had felt himself, and that was still occurring on the streets of Camden Town.

In the story I wanted to set the mood of the book with an impression of the London streets that were as black and polluted as Scrooge’s heart. In Dicken’s description of Victorian society he explains that it is very different to that of the city: “…A little market town appeared in the distance, with its bridge, its church, and winding river.” This is in stark contrast to the city where “the house fronts looked black enough, the windows blacker” – the blackness being caused by the masses of coal dust produced by industry.

Here are a couple of rough sketches that I created to set the mood of the city and Scrooge visiting the streets of his old town with the ghost of Christmas past. Hope you enjoy them. I will have more to come on my next post. 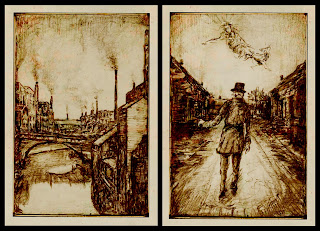